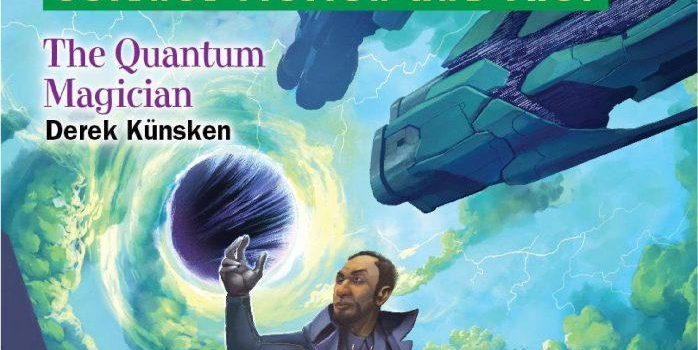 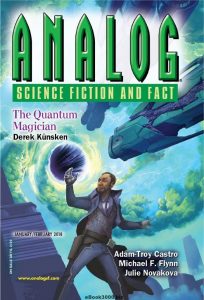 I am continuing to catch up on some 2017 stuff I missed. For example, Sofia Samatar‘s col­lection Tender is one of the best collections I’ve seen in some time. This exceptional debut collection includes two new stories, “An Account of the Land of Witches”, and “Fallow”. Both are remarkable. “Fallow” has perhaps gotten more notice. It’s clearly one of the best novellas of the year. It’s set on a planet colonized by what seems to be an Amish sect fleeing an increasingly ruined Earth. They scratch out a difficult living in what seems to be a domed colony – with something called the Castle nearby. (Is that the spaceship they came on? Part of the appeal of the story is that we are told relatively little.) The story is told by a woman who has written stories before, only to see them rejected (literally, as a waste of paper). Now she will tell the truth about her life so far – or, really, about three people who to some degree rebelled against her society: her teacher, Miss Snowfall; a man named Brother Lookout, a “Young Evangelist” who became involved with a visiting “Earthman”; and finally her sister Temar, who went to work at the Castle. Samatar invests all this with mystery, with hints of the state of the ruined Earth (and their hopes to return), with slant looks at the details of the religion followed in this colony, with precise and affecting charac­terization – it’s a sad but beautiful and not quite hopeless story.

“An Account of the Land of Witches” is as good in a very different way. It opens with a lyrical narrative by Arta, a slave who is taken by her master (a merchant) to the Land of Witches, where she learns their magic – or Dream Science – which involves language and the manipulation of time. This is absolutely lovely writing, and the magical system is beautiful. There follows – all in different, well realized voices – a “refutation” of Arta’s account by her angry master, and then a desperate section told by a Sudanese woman trapped back home by visa problems (and local strife) as she tries to research the fragments that make up Arta’s account and her master’s refuta­tion for her degree from a US university, then a lexicon of the witches’ magical language, and then a strange almost mystical account of a journey in search of the Land. This is really striking, and, like “Fallow”, original.

Analog opens 2018 with “Blurred Lives“, a novella from Adam-Troy Castro, the latest in his stories of Draiken, formerly an operative employed in a number of interstellar conflicts, who tried to retire to an out-of-the-way planet to avoid the attention of his former employers, unsuccessfully. Here he and one of his former enemies, Thorne, are joined in hunting the “puppet masters” who directed their operations, and who thus forced them into complicity in what they now see as crimes. Thorne’s escape over time has been pure escape – into a sensory deprivation box – and she remains more likely to simply want to forget, while Draiken is driven by a desire for something like justice. This leads them to Liberty, a cylinder world whose inhabit­ants live luxurious lives, but who are subject to random selection for “disposal” at the behest of the rulers, one of whom is the man Draiken and Thorne seek. They find him ready to die, and he offers Draiken a deal: enter one of the – call them “prisons” – and escape, and Draiken can have what he wants (freedom for all the prisoners). But if he doesn’t escape, he stays there forever. This is the occasion for one of Castro’s specialties – particularly inventive horrors that humans can inflict on others, and I’ll leave the nature of that for the reader to discover, but it’s horrifying and morally awful. There is also a nicely put dilemma at the resolution. Strong stuff, with perhaps a hint of over-constructedness to the setup – but that’s in service of a worthwhile moral.

My favorite pieces in the January-February Asimov’s were a couple of the shortest. Ian Creasey‘s “The Equalizer” posits a device that disguises a person’s appearance and other gender indicators. Pamela is HR director for her company, and she uses it for job interviews, to make sure bias is eliminated. She’s coming off a bad breakup and has had some unsatisfying dates, so it occurs to her to try using the Equalizer on a date to see if that might help her focus on her date’s real qualities. It didn’t seem to me that that would work well, and it doesn’t: there’s a tiny and believable twist, and the story doesn’t arrive at any real epiphanies, but it raises some interesting questions. S. Qiouyi Yu‘s “Mother Tongues” centers on a tech that allows one’s ability to speak a certain language to be extracted from their mind – to be implanted in someone else. Alas, the process is destructive. I confess I didn’t really believe in this tech at all, but Yu uses it to tell a moving story about a woman who is forced to sell her fluency in Mandarin, her “mother tongue,” to finance her daughter’s education… and of course this has costs more deep than she had anticipated.

I mentioned once before my suspicion that Scott Andrews pairs the stories for each issue of Be­neath Ceaseless Skies based on some similarity of theme or situation – although the link between the two stories may only be perceptible to him. However, I think I can see the link between the stories in the January 4th issue – both concern music. (The previous case I mentioned had two stories concerning the sense of smell…. I assure you, the links are not so sensual in most cases!) Tamara Vardomskaya‘s “Sonata for Accom­panied Cello” is about Rielle, who gave up her composing and performing career when she got married. Her husband’s career has foundered and they are struggling to make ends meet when she gets an offer to accompany a young cellist trained by her husband’s hated rival, the man her husband beat for a major prize years earlier. Ri­elle is noted for her strict sense of time, and soon realizes that the cellist she is to accompany is an automaton, making strict timekeeping vital to the performance. But is the automaton (significantly named Galethia) content with doing exactly as her master demands? Nice work…. “An Aria for the Bloodlords” by Hannah Strom-Martin is a fun, if perhaps overwrought, story about an opera conductor desperate for the favor of his patron Bloodlord, who is forced to accept a new diva for his latest production, only to realize that she is prone to deviating from the accepted score,which could be very dangerous and which could threaten the control of the Bloodlords. As I said, it’s pretty fun, but a bit too obvious in its working out.

Uncanny‘s first issue of the year has a couple of neat SF stories by a pair of spouses: “The Hydraulic Emperor” by Arkady Martine and “The Utmost Bound” by Vivian Shaw. Shaw’s story is about a couple of operators of a robot explorer on Venus, which makes a shocking discovery. The story lets us ponder the implications, which are not cosmic, but affecting and rather dark. Martine’s piece is about Mallory Iheji, who finds lost things and is fascinated by a future immersive art form, films in which the viewer seems to be part of the action. The Hydraulic Emperor is a short piece by a major and reclusive immersive filmmaker, but no one has a copy, and Mallory wants one. She is offered a commission: obtain a Qath puzzlebox – an alien artifact – and she will be paid with a copy of The Hydraulic Emperor. The Qath auction their boxes – in exchange for some­thing that is a particular sacrifice for the buyer. You can probably guess the conclusion, but it’s neat stuff, with nice descriptions of future art, and well-turned interactions between Mallory and a rival.

Slate, in cooperation with Arizona State Univer­sity’s Center for Science and the Imagination, has featured the occasional SF story recently as part of its Future Tense program: near future speculation, much like ASU’s recent anthologies. The latest Slate story is Charlie Jane Anders‘s “The Min­nesota Diet” about a “smart city” with all kinds of eco-friendly intelligent tech, and a need for likewise “smart” supply systems. What if these fail? Anders is clever and speculatively interesting about the problems, and there is an interesting cast of characters – and an amusing conclusion. For all that, it’s minor work: not Anders at close to her best or most engaging, but enjoyable enough.

New Haven Noir is one of a very long series of original anthologies of crime fiction, each set in a specific place. The stories aren’t normally SF, but this time one is: John Crowley‘s “Spring Break” (which is currently on the short list for the Edgar Award for Best Short Story). It’s set a couple of decades in the future, when it seems universities are essentially virtual. So are books! The narra­tor goes on a “Spring Break” to a real physical college (Yale, of course), and he encounters a real physical library, with real physical books. And a librarian, who has his own feelings about students who don’t read real books. Much of the charm in the story (which does feature a crime, but not one that is all that interestingly solved) is in the telling, in a convincing future slang – as well as the sort of behind-the-scenes meditation on the changing place of books in our culture. 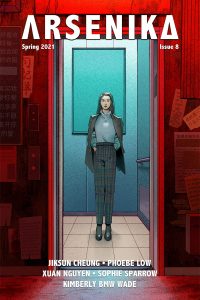