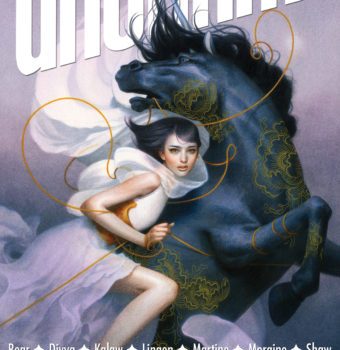 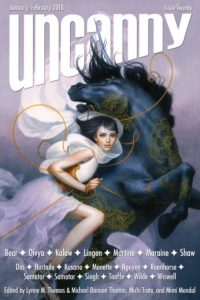 Although more concerned with character than plot, Elizabeth Bear‘s “She Still Loves the Dragon” (Uncanny) still tells the love story of a knight-errant and a dragon. (“She still loves the dragon that set her on fire.”) Since love stories often turn dark and end bit­tersweet, I feel justified in praising it here. Com­pelling, romantic, and – like the best fantasy – it allows us to both feel and learn.

Of the remaining six originals in this issue, three others are suitable for our bi-monthly view through the glass darkly.

Science fiction often offers a way of examining subjects that are unexaminable. Any fiction can focus on characters dealing with pain and sacri­fice, but treating the theme science-fictionally al­lows both the distance and empathy a reader needs to completely understand. “Contingency Plans for the Apocalypse” by S.B. Divya does just that. (“My apocalypse doesn’t ride on horseback or raise the dead or add suns to the sky. It arrives by tank and drone, the strict report of automatic weapons, the spying eyes of neighbors.”) Divya’s poignant, fast-paced, action-packed tale of a “low-priority group” family escaping a dystopian Arizona without their “high-priority evacuee” member is sure to make readers think about their own choices and ability to survive.

Arkady Martine explores acquisitiveness and pain in “The Hydraulic Emperor“. (“The Hydraulic Emperor is nine minutes and twenty-seven seconds long. / It was filmed on an eighteen-quadcopter neocamera rig back when neocameras were the only way to make immersive film….”) An alien experiment measures the lengths to which humans can go to get what they think they want. It’s a captivating tale of passionate collecting and the agony of sacrificing the object of one’s desire.

You are different and you are angry, but you learn to stifle yourself. Then everything explodes. Sunny Moraine makes that situation literal in “Your Slaughterhouse, Your Killing Floor“. (“A girl walks into a bar. / She grabs her forehead and yells ‘motherFUCK’ and the bar and every­thing around it except for the girl explodes in a blast that vaporizes half a city block and does mi­nor to moderate structural damage for a radius of roughly two miles.”) This story is much more than didactic extended metaphor, though. It twists what appears to be a relationship between two outsiders made for one another into something quite dark.

“The Utmost Bound” by Vivian Shaw needs neither aliens or anger to be scary. (“The check-in chime in his headset: on time, annoyingly on time, as usual, waking him as they came around the curve of Venus.”) Safe in their command module, two astronauts orbit high above the poisonous atmosphere of Venus as a remote rover explores the deadly planet. They find something horrifying, and experience true terror as they decide whether or not to tell those back on Earth about it.

Anathema: Speculative Fiction from the Margins is a Canadian tri-annual speculative fiction maga­zine of work by queer POC/Indigenous/Aborigi­nal creators. That does not, however, necessarily mean the stories are edgy or skirt the farthest reach of genre boundaries. Of the four stories in the third issue, three are dark enough for us to consider, but note: the fourth, “The Poet and the Spider” by Cynthia So – charming and suitably lyrical – is probably the strongest in the issue.

Two tales, “Learning to Swim” by Mimi Mondal and “Diary of War” by Joyce Chang, feature aliens. In the Mondal story (“The third time I float into awakening, Raon is leaning over my face. / Am I dead?”), humans have turned against the Slyphians, an alien race with whom they have shared a peaceful coexistence for de­cades. Now, the first generation of mixed-species offspring are maturing. The story is really about giving young Uma, a human but an outsider who finds acceptance and love among the aliens, a reason to go on living. The focus on character and emotion succeeds, but I would have appreciated more background. Humans, unfortunately, don’t need more than unreasoning hatred and bigotry to exile immigrants or start an interstellar war, and the idea of racial purity is telegraphed, but I would have liked to hear their excuses.

Humans and alien invaders are already fight­ing hand-to-insectoid-claw in Chang’s “Diary of War”. (“I am awake. The war hasn’t arrived yet.”) It’s a nuanced tale touching on gender, identity, the necessity of defense, and the need for understanding. That may be too much for a little story, but it does make one think.

Death comes to Brooklyn – via tarot – in stacked heels and glitter in “Death Comes to Elisha” (“The F train rattles through the joint and it’s a passage of glory.”) by Iona Sharma, a short but clever take on the anxiety of our times. Those for whom Elisha reads the cards all have the same concern: is this “how everything – the world, the American experiment, everything they’ve known – ends.” Despite the story’s brevity, queer Jewish Elisha and Death are exceedingly well-drawn. We are reminded that, like the major arcana card, “Death” is not about endings, but renewal and transformation. I’d love to read more about Elisha.

Our dark purview can accommodate two of the three originals in Kaleidotrope‘s Winter 2018 is­sue. In the poetic “Shadows and Bells” (“In the kingdom of the dead, the bells rang.”) by Mari Ness the queen of the dead must do her duty and restore the kingdom to its shadowy silence, but she is tempted to rejoin the living.

“A Slip in the Slice” by Heather Morris (“I open my eyes to a ghost.”) should have been more. Twin Gwen lives in a timesliced apartment (a space can be shared by two people – each alone – by overlapping slices of time) and, enjoying solitude, never interacts with “roommate” Paul until it appears he is in some type of distress. She goes to sister Stacy (yes, the names are an Amazing Spider-Man reference) for help. Luckily, Stacy’s male friend is nerdy enough to understand the technology, and the trio affirm the dire situ­ation. This could have been a really good story, but once the (rather complicated) time/place is set up, the characters established, a crisis delivered, and possible plotlines set bubbling – it ends with the narrator abandoning her regimented ways and acting on gut impulse. As is, the tale comes to a much-too-abrupt end.

The Dark started the new year off well with “In Her Bones” by Lindiwe Rooney. (“The first time Wekesa Mwani came to Ayanda’s home, he brought with him his famous panga. The cleaver hung from his leather belt and slapped against his calf as he walked, unchallenged, through the gates and gardens into the Sekibo house.”) The author uses two aspects of South African culture prob­ably little known to most readers of The Dark: the prevalence of organized crime and the belief in multi, traditional healing mixed with (for lack of a better name) witchcraft. Quiet, observant nineteen-year-old protagonist Ayanda takes bloody (if well-deserved) revenge on a bad dude from a criminal family allied to her own. Her consequences are set both by ancient traditions of the families and those of the spiritual world. Her choices lead to what is destined to be a remarkable journey. The fascinating story seems to be the beginning of a much longer tale, but it still stands well as it is.

January’s other original, “Her Brother and His Sister” by Bill Kte’pi, is a short retelling of the ending of the fairy tale “Hansel and Gretel”, albeit with unnamed siblings as characters. (“‘What do we do now?’ her brother asked. His sister turned away from the oven and began opening drawers in the tiny house, filling her pockets. When she didn’t answer right away, he added, ‘It smells so good in here.’ / His sister served him a look as she put a silver spoon in her pocket.”) As the sister tries to lead her rather dim brother through the many perils of the forest, reality either shifts or deposits differing versions of itself in her head. But then fairy tales aren’t real anyway, right? Interesting.

The editor of Mythic Delirium introduces issue 4.3 (January-March 2018) with, “Our stories in this is­sue venture into the shadows, and few who follow after will emerge unscathed.” Sounds like our turf!

In “When the Bough Breaks“, Jaymee Goh shows us how terrible it can be to see warning signs, supernatural and not, when those with power won’t heed them. Or, as the story says, it may not be that anything could have been done anyway. Children living at an ultra-modern new condominium meet, one-by-one, with fatal accidents or illness. They know this is unnatural, but the adults don’t buy it. The story combines malevolent Malaysian forest spirits with the true tale of a disastrous landslide that was – like recent mudslides in California – at least partially the result of building without enough attention to soil erosion. (Cheat: this is not a starting line, but an ending one: “They never wanted us here. They finally have their wish.”) Overall, this one might have benefited from further polishing, but is still effective.

A mother and father (probably not biological and certainly not morally authoritative) exploit a “miracle child” who speaks with the “tongue of angels” in Jennifer R. Donohue‘s “A Thing with Feathers“. (“Lilybeth long ago learned to never wipe away her tears, because Mother bottled those to sell.”) A pleasing enough tale, but not much to it and pretty familiar territory, too.

I love the title of Tiffany Trent‘s “The Papy­rotomist“. (“I cut the shadows from them and they die smiling.”) Her character cuts shadow rather than paper, however. The concept of a showboat full of “entertainers” who each take, in one way or another, sustenance from some facet of human existence is a great idea, but it could have been so much more if the swamps, cotton fields, and other elements of the setting had been more detailed.

So, no one hits a home run, but the authors – all four Mythic Delirium rookies – still have the goods to keep playing in the league. 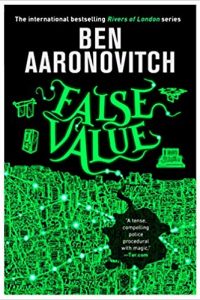