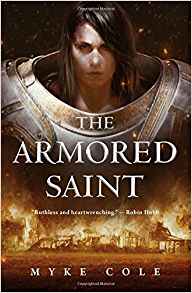 Staying with our theme of “dark, with military overtones,” we have Myke Cole’s The Armored Saint, out of Tor.com Publishing’s novella line. Like Ironclads, it’s a slender volume – it tops out at 206 pages in paperback – but unlike either Ironclads or Clockwork Boys, it doesn’t feature any amount of travel. Instead, it focuses on a young woman from a small village, a young woman who has very limited knowledge of any wider context.

Heloise is the adolescent daughter of her vil­lage’s Factor. A combination of events puts her in a situation where her life and her family’s life is in danger, and this is complicated by her realisa­tion that what she feels for her agemate and best friend Basina is not a platonic love, but one that includes sexual desire.

In this world, scripture is based on the deeds of a (semi-mythical?) past Emperor, who fought with wizards and devils, and closed portals to hell. Religion is based around scriptural prohibitions on wizardry, non-normative sexuality, and obedi­ence to authority, which are brutally enforced by a militant order – “the Order.” The Order is drawn from a higher social class than peasant villagers, and operates with utter impunity under its mandate to make sure that no one consorts with devils, that no wizards are allowed to live, and that no portals to hell open. They believe in the “strike first, ask questions never” method of operations, and eradicate whole villages rather than accept any risks either to their mandate or to their authority. At the beginning of the story, they are, quite frankly, more frightening than any quasi-mythical devil magic that may or may not exist.

Heloise meets the Order for the first time on the road between her village and the neighbouring one. She’s in company with her father, and the Order bullies them both, destroying some of the paper that provides their livelihood and threaten­ing them when they protest. Heloise is angry and afraid, and disappointed in her father’s resigned acquiescence to this behaviour.

Later, the Order requires Heloise and her village to participate in the slaughter of their neighbouring village, because a young, mentally disabled man there has been ranting about devils. Heloise and her village are ordered to form a cordon to prevent any of their neighbours escaping, and Heloise sees a young woman beaten to death in front of her. When a member of the Order turns on Heloise for being an insufficiently eager participant in murder, her father intervenes, attacking that member of the Order and causing him to back down. But defying the Order has serious consequences, and at home in their own village, Heloise and her family are required to hide in order to preserve their lives. When this secrecy is broken, matters come to a head in a violent showdown that reveals magic has been real all along – and is just as dangerous as the Order, perhaps even more so.

I have mixed feelings about The Armored Saint. Mixed, because I’m damned tired of faux-European medieval-esque settings where patriar­chy and homophobia are the norm and where, if the main character acknowledges queer desire or enters into a queer relationship, it ends badly. In The Armored Saint‘s favour, Heloise’s character is well drawn, and her uncertain, fumbling at­tempts to come to terms with her attraction to her best friend are sketched with sympathy. As is her stubborn – and terrified – determination to fight to protect her people when fighting is necessary. This is the first volume of several, so Heloise may yet find a relationship that doesn’t end in tragedy.

Tilting the balance towards ambivalence, however, is the grim moral calculus that forms the background to events. Once we discover that magic is real – and just as dangerous as described – one cannot help but acknowledge that the Order has a point in taking extreme measures to prevent these dangers. And yet, the Order is itself inhumane, immoral, and regularly both engages in atrocity and forces other people to do so, too. While navigating this grim ethical bind is not the point of The Armored Saint – the novella itself is more concerned with Heloise’s move into adult­hood – it’s something that needs to be acknowl­edged and addressed in order for this work to be truly successful. If not in this volume, then another. 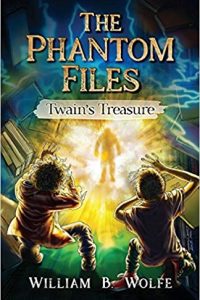