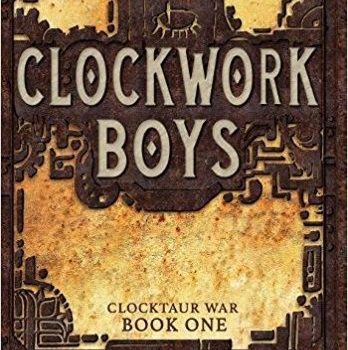 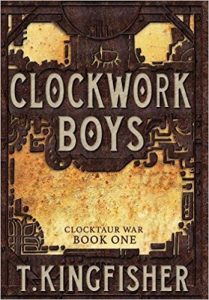 “Darkly funny” is a phrase that also describes Ursula Vernon’s (writing as T. Kingfisher) Clock­work Boys, the first volume in the Clocktaur War duology, which will be completed in spring with the release of The Wonder Engine. Clockwork Boys is a little darker than most of Vernon/Kingfisher’s oeuvre. It starts by introducing us to Slate, a woman who’s visiting a prison to recruit some muscle for a suicide mission. Slate herself is quite resigned to the idea that she’s going to die soon, for she too is a condemned woman – a forger convicted of treason – and she’s in charge of this suicide mission.

In the prison, she finds Sir Caliban, a temple knight – a paladin – who killed three nuns and five novices while possessed by a demon. The demon is dead now, and its insubstantial corpse is rotting at the back of Caliban’s soul. Caliban’s imprisoned anyway, because, although he wasn’t responsible for what happened while he was pos­sessed, his temple doesn’t believe that people get possessed without having done something wrong. Slate thinks – as does her talent for second sight, which manifests as an overpowering smell of rosemary – that Caliban’s her best bet. He might be dangerous, or he might be important: the rosemary smell isn’t specific as to which.

So Caliban gets to join Slate and her assassin colleague Brenner (another condemned man, and Slate’s former lover) on a suicide mission. What’s the mission?

Slate and Caliban’s city is losing a war. Badly. Their neighbour-enemy, Anuket City, has devel­oped weapons that everyone calls the Clockwork Boys: unstoppable creations of clockwork and flesh, killing machines that can destroy everything in their path. Missions have been sent before to try to investigate – and possibly sabotage – what makes the Clockwork Boys, but none have suc­ceeded. Slate’s mission is the Dowager Queen’s last (faint) hope, and Slate herself thinks it’s likely to fail. The only reason she’s doing it at all is because someone’s put a magic tattoo on her arm that’ll eat her from the inside out if she tries to go off-mission. Accompanied by a young scholar from a religious order with an institutional bias against women, Slate, Caliban, and Brenner – and young scholar Learned Edmund – set off on what might be the world’s least fun road trip.

The story is told in the third person, alternating between Slate’s viewpoint and Caliban’s. They are both fascinating characters – as one might expect from a writer of Ursula Vernon’s calibre. Slate is a pragmatic woman with an interesting background. Her history with Brenner makes for a complicating factor when it becomes apparent that she’s attracted to Caliban. Brenner’s a surprisingly protective ex, and he doesn’t really believe that Caliban’s at all a safe person to be around – he thinks Caliban was either faking the demon, or is still possessed by one.

Caliban is… well, he’s certainly an antidote to the brooding-for-no-good-reason godly paladin common to the Forbidden Realms role-playing-game tie-ins (or, indeed, that Neverwinter Nights videogame of yore, which I understand provided inspiration for Vernon herself). Cut off from the touch of his god, broken free of the certainties of his old life, with a dead demon muttering in his head – and his nightmares – and with a full load of guilt and horror for his demon-possessed ac­tions, as well as facing the prospect of a suicide mission, he manages to keep both his mind and his sense of humour, such as it is. He’s also attracted to Slate, and determined not to act on that attrac­tion: he thinks he’d be taking advantage of her, or betraying her trust, when the truth is he really doesn’t trust himself.

The roadtrip winds through a weird landscape, and the characters run into all kinds of problems. Between mud, horses, Slate’s allergies, and the Clockwork Boys, there are a lot of dangers. And that’s before Caliban finds himself in the middle of a village of deer-people led by a possessed sha­man, a shaman who clearly wants something from this particular ex-paladin and his dead demon.

Clockwork Boys ends without resolving its ma­jor problems, but it’s a fast and entertaining novel, one that nonetheless succeeds in being about trust, determination, and the tension between hope and despair in impossible circumstances. It’s also full of Vernon’s trademark brand of grimly humorous pragmatism – though Clockwork Boys has a lot less gardening than I’ve come to expect. 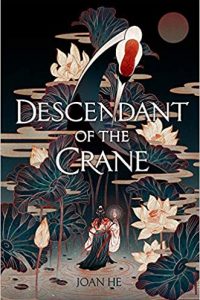 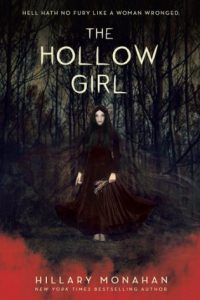