Ukrainian SF, fantasy, and horror is little known in the English-speaking world, leaving not much of a shadow in publish­ing or on the internet, but there is a long, solid, and growing tradition in what is usually called “Fantastyka.”

Ukraine has long been a bilingual – Ukrainian and Russian – country. Ukraine was an important part of the Russian Empire and even more criti­cal to the Soviet one. The language issue causes much angst amongst Ukrainophiles and Rus­sophiles alike, and confusion for everyone else. “Ukrainian” doesn’t necessarily mean Ukrainian language and a Russian-language work does not necessarily mean Russian. Most Ukrainians just take it in stride and accept it. It does, however, tend to obscure the Ukrainian fact in a generic Russian haze.

There has long been an active Ukrainian SF/F community of writers, translators, academics, art­ists, and fans. The Zoryanyy shlyakh (Star Trek) SF club (styling itself as an English-language fan club) was active for some time and published the fanzine Chernobylization. There is another, contemporary, “starry” club, Zoryana fortetsya (Star Fortress), which has a website and Facebook group and whose aim is to promote Ukrainian SF/F literature.

Another indication of the strength of Ukrainian fandom is the fact that Eurocon (the annual SF/F convention held under the auspices of the Euro­pean Science Fiction Society) has been held in Kyiv twice, in 2006 and 2013; Eurocon 2013 guest bios also highlighted several contemporary Ukrainian writers, translators, fans, and academics. Many of them have actively participated in other SF/F conventions in Europe in the last decade.

Only two or three years ago, it was difficult to find Ukrainian language SF/F in bookstores. Now, even though there are reports that publishers are still wary of print­ing original Ukrainian language SF/F (market fears, not necessarily linguistic bias), it is evident that there has been a tremendous growth in world SF/F literature in Ukrainian translation. In years gone by, only the Harry Potter series was easily available in transla­tion. But now, for instance, much of Stephen King is being published as fast as it can be translated. There are recent and upcoming translations of Clifford Simak, Stanislaw Lem, Roger Zelazny, Douglas Adams, Ray Bradbury, and Neil Gaiman, among others.

There are precedents for fantastic literature in the ancient Ukrainian folk traditions. Closer to our times, Mykola Hohol (known in some circles as Nikolai Gogol – there’s the Ukrainian/Russian haze again) wrote many fantasy stories based on Ukrainian folk motifs, including the horror story “Viy”, which was made into what may be the first Soviet horror film.

During the development of Ukrainian literature in the 19th century, it was claimed that writers couldn’t afford to dabble in non-serious work like the fantastic. Even so, the iconic writer Lesia Ukrainka wrote her play Lisova Pisnya (Forest Song) about the love affair between a young man and a Rusalka (forest nymph). The Russian/Ukrainian (here we go again) historian and writer Mykola Kostomarov wrote a story anticipating Orwell’s Animal Farm. Lesia Ukrainka, again, in 1906 produced a critical survey of world Utopian literature for Ukrainian readers.

Specific English-language information on Ukrainian SF/F can be elusive. A search of the Internet Encyclopedia of Ukraine using the terms “sci­ence fiction,” “fantasy literature,” or “fantastika/fantastyka” finds nothing. Wikipedia does have a category of “Ukrainian science fiction writers.” Even being generous, several of the entries are Ukrainian or SF/F authors only by a stretch. Still, there are articles on Kyiv writers Maryna & Serhiy Dyachenko and Kharkiv’s H.L. Oldie (pen name for Oleg Ladyzhensky & Dmitry Gromov). From an older generation, Volodymyr Savchenko has an article (some of his translated work was featured in “Soviet Science Fiction” anthologies of the ’60s and ’70s), as does the younger writer Volody­myr (Vladimir) Arenev. Wikipedia’s “Ukrainian fantasy writers” adds Svetlana Martynchik (born and raised in Odesa and currently living in Lithuania), who writes under the pseudonym of Max Frei and who has been relatively well translated into English. 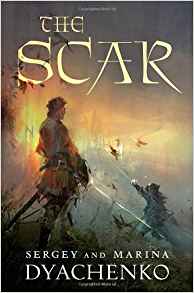 Maryna & Sergiy Dyachenko, often mistaken for Russians, are very popular fantasy writers of the Russian-speaking world (as is H.L. Oldie). Though some of their work is in Ukrainian, it mostly appears in Russian first and in Ukrainian in translation. The novel The Scar was pub­lished in English by Tor Books. Though their Wikipedia entry claims that they have moved to Moscow, more reliable sources report that they’ve actually immi­grated to the US. Besides The Scar, they seem to be attempting to sell ebook translations of some of their other works and rumors persist that another novel will be published in the US in 2018. 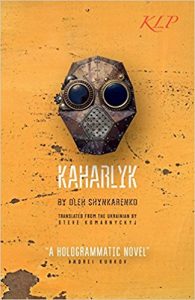 Oleh Shynkarenko’s Karharlyk is a novel originally written on Facebook in 100-word blocks as a response to the 2013/2014 Maidan revolution. It is variously described as a dystopia and “bulletins from an alternative reality,” follow­ing the hero wandering a future Ukraine ravaged by Russian perdition and artificially intelligent satellites, searching for his lost memory and wife. Kalyna Language Press (<www.kalynalanguage­press.com>) conducted a successful Kickstarter campaign on its behalf and it is now available in an excellent translation by Stephen Komarnycky. Kom­arnycky has also translated Yuri Scherback’s Realm of Darkness, a futuristic thriller.

There are other dark corners and niches of the internet where some trace of Ukrainian SF/F can be found. Matt Mitrovich, on the Amazing Stories blog, writes about alternate history involving Ukraine. Ol’ha-Maria Storynska, in an English-language literary blog from 2009, discusses several Ukrainian SF/F works published in the last decade.

Perhaps the most bizarre Ukrainian SF/F story of recent times, though in reality perhaps only worth a footnote, is the saga of Fedir Berezin. Ber­ezin is a Russophone/Ukrainophobe writer from the Ukrainian city of Donetsk who was known for his paranoid military fantasies of heroic Russian resistance against Ukrainian and NATO aggres­sion. Berezin distinguished himself by leading an armed takeover of the offices of the Donetsk chapter of the Writer’s Union of Ukraine (let that image sink into your consciousness for awhile) and became, for a time, the Deputy Minister of Defence of the self-styled Donetsk People’s Re­public. SF writer Bruce Sterling invited Berezin to submit a story for his edition of MIT’s Technology Review annual SF issue. Sterling was forced to withdraw the story because Berezin, for his part in the conflict in Donetsk, was under sanction – it was illegal to deal with him under US law.

Much more seriously, there is only one in-depth, English-language study of Ukrainian Fantastic Fiction, Wal­ter Smyrniw’s Ukrainian Science Fiction: Historical and Thematic Perspectives. Smyrniw is a literary critic and Professor Emeritus of Mc­Master University, whose expertise is in 19th- and 20th-century Ukrainian and Russian literatures. In this mono­graph, he presents his outline of Ukrainian Science Fiction in the 20th century over some 20 chapters. He introduces SF and its historical development internation­ally – though more from the point of view of literary criticism and only to the end of the 19th century. He develops his belief that early Ukrai­nian SF was conceived under the wide influence of western Utopian literature, and spends three chapters analyzing what he considers the first work of Ukrainian Utopia/SF, Koly ziishlo sontse: opovidannia z 2000 roku (When the Sun Rose: A Tale from the Year 2000) published in Toronto in 1918 by Pavlo Krat, a Ukrainian-Canadian emigre and political refugee.

Roughly, the first third of Smyrniw’s book – eight chapters – is devoted to the historical over­view, including significant coverage of Ukrainian emigré SF, including Volodymyr Vynnechenko’s Sonyas­hna Machyna (The Sun Machine), if one considers Vynnechenko an emigré (he spent the last 30 years of his life in exile).

The next five chapters are devoted to a description of the themes of space travel, time travel, alien con­tact, robots, androids, and cyborgs. Such works that are described offer much speculation on cognition, self-awareness, and what it is that makes us human, and whether machines can ever be considered as such. The recognition of the impor­tance of those themes is perhaps the most significant and interesting aspect of the book.

Another third or so – three chapters – is devoted to Oles Berdnyk, a well-known SF writer of the ’70s who was expelled from the Ukrainian Writers’ Union for “antisocial acts and devia­tions from the principles and tasks outlined in the charter of the Writers’ Union of USSR,” and for “forget­ting our materialistic philosophy and indulging in ‘mysticism’ and ‘spiritualism”‘ and writing “murky and… erroneous work in the ideological sense.” Berdnyk suffered serious consequences because of his work and for his co-founding of the dissident Ukrainian Helsinki Group.

Smyrniw ends the main part of the book with a chapter on humor in Ukrainian SF – perhaps allowing one to wonder if such a concept actually existed – and then offering conclusions, a selected bibliography, and an index of names.

It’s very easy to be cynical about academic works and one must take care in reviewing a book for what it is, not what one would wish it to be. In that sense, it must be accepted that Smyrniw’s subtitle “Historical and Thematic Aspects” is very successfully fulfilled. He goes into great detail on many works and how they fit into the themes he’s identified, and that is a very important thing indeed. However, there are many issues that one would like to have seen discussed and the narrow focus leaves many questions.

In the end, there is more than enough evidence of the existence of Ukrainian SF/F. The hope is that Ukrainian fans and writers will be able to more readily take part in the world SF/F conversations in the future. 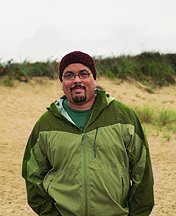 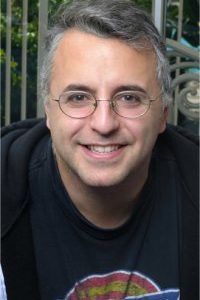