I’ve been thinking about that statement more as I turn on my computer every morning and stare at my list of tasks for the day, the week, the month, the year. On top of my writing career, I have a full-time job in advertising, and that’s gotten tougher to balance year-over-year. Our time is finite. Jobs eat a lot of it. Once, I would have killed to get the opportunities that I now have to turn down because I just can’t fit them into my schedule. That knowledge makes me feel terrible about… well, everything, and it’s taken me a while to figure out why.

Even no longer saying ‘‘yes’’ to everything is a step in the right direction, for me. It took several terrible failures to hit deadlines, and some cancelled appearances, before I realized I couldn’t physically perform my writing on a dime like I used to. As a newer writer, I wasn’t as aware of structural story problems as I am now. That makes it tougher to turn in work that I personally consider sub-par. It’s as if there’s an inverse relationship between my standards and the amount of work I’m able to put out every year.

Yet even as I write this, I keep coming back to that phrase, ‘‘Fear masks itself as procrastination.’’

One of the things no one tells you as a new writer is what to do when the financial success of your first book, your first three books, your first dozen books, don’t give you the ability to write full-time. If I had any other way to get affordable, reliable health insurance I would be planning to pack it all in and just make it work. But our government is currently a hot disaster, and it’s impossible to plan for a future when your access to that health insurance could be snatched away at any moment.

So here I am, scrabbling with ever growing piles of words.

And living in fear.

Fear of what, though? That’s what I keep coming back to. If procrastination, if my steaming heaps of deadlines, are about fear, what am I so afraid of?

I have seen the very best and the very worst that the publishing world has to offer. I’ve had contracts cancelled, publishers sold, books tank. I’ve also had books earn out good advances, receive many awards, and seen the faces of readers whose lives were changed by reading my work. If I’ve seen the best and the worst, one would think there wasn’t much more that I could fear. Issues like obscurity, being forgotten, one’s work erased, are largely out of my control. So that can’t be it either. Perhaps it is the simple fear that my work won’t get better and better. It’s the fear that the work will get worse, or that my abilities as a writer have peaked. Maybe, after six years of publishing novels, this is as good as it gets.

It’s easy to have mid-life crises early in one’s writing career. In talking to other professionals, we’ve agreed that three years in publishing often feels like a decade of any other career. You experience all the highs and lows, the punishing schedules, the traveling and touring, squeezing out words, the constant busy-ness, in hyper-concentrated bursts. The end of every year feels like five. And as you crawl out of bed again in January, you realize that the next year, you need to get up and do it all over again if you want to stay relevant.

Doing that full-time is a tough gig, sure, but so is any other day job. Now imagine doing all of that while holding down your current full-time gig, and knowing that there was no end in sight, that in order to keep to your dream of being a career writer and still having money for vet bills and health insurance, that you had to work both jobs forever until you keel over and die.

I am, of course, privileged to have two jobs. I’ve privileged to have access to the life that I have. But knowing that doesn’t make it any easier when you’re staring into the future and every day looks like a bloody battlefield of deadlines.

And yet, to give up any part of this life feels like a little death, a loss. Writing for a living is all I ever wanted to do. I’m lucky that both of my jobs allow me to do this. I could be staring into a future of bleak deadlines doing something I hated. The fear of failing at something one is passionate about, though, is far worse than the fear of failure at something I hated. If I hated a regular job, I could quit and look for something else. Quitting being a novelist after the long slog to get and stay here would be the worst thing in the world.

So I continue to slog.

The slog to stay here never ends. There’s no horizon.

Writing may be the best job in the world for me, for many of us, but it doesn’t protect us from the realities of the capitalist world we live in. We live in a world where there is no free lunch, no mercy for those who fall behind, no consideration for those who have trouble pulling up those boot straps. It’s eat or be eaten, and there’s always someone coming up behind you who will do similar work for better and cheaper and not complain about it. Our society ensures there is always someone more desperate than you. That’s why it’s built the way it is, to ensure that labor can be exploited to the utmost, to make it harder for people to come forward and say, ‘‘I’m tired, and I’m worth more than this,’’ for fear of ridicule and blame.

There’s always someone who will do it better for less.

Perhaps that’s where the fear truly lies, then: this knowledge that as my craft improves and my price goes up, that the market cannot bear it. I recognize this fear for what it is every time I negotiate a salary or give my hourly rate. It’s this fear of stating what I’m worth. It’s a fear of taking a stand and finding that there is no one left to see me do it. The world moves on.

I see this fear most often in other women, those like me who encountered a world that told us we were profoundly lucky every time we weren’t harassed out of an industry. We were lucky every time we got an opportunity, every instance we got paid on time. We were lucky to receive what many of our male counterparts assumed was standard treatment. Trying to squeeze out a salary on par with my male peers at my day job has been an exercise in persistence. Now I’m here working to squeeze out advances on par with my male peers, and I see the same hurdles, the same people saying I should be happy just to publish, happy to have so many deadlines, happy to work 12-hour days because, hey, you’re doing what you love!

The fear that we are not enough can be debilitating. The fear of asking for what we are worth and being denied, being laughed at, being closed out, is real and valid. But to sit in fear and claw at deadlines and procrastinate until the end of all things isn’t going to get us any further.

If we can’t risk going forward, if we can’t push past the fear and demand our worth, then our careers are dead anyway.

This is what I tell myself as I finish this particular deadline, and move on to the next. 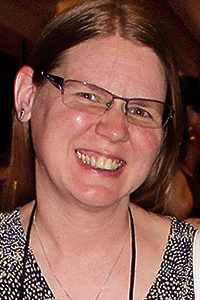 One thought on “Kameron Hurley: Fear, Procrastination, and the Thorny Problem of Demanding What You’re Worth”