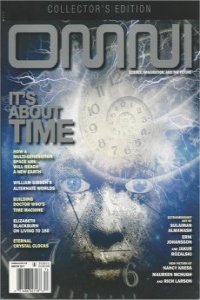 Omni returns to print, after over 20 years, with Ellen Datlow returning as fiction editor, and with stories in this quarterly issue by Nancy Kress, Maureen McHugh, and Rich Larson; plus, November/December issues of Analog, Asimov’s, and The Magazine of Fantasy and Science Fiction, with fiction by Connie Willis, Scott Edelman, James Sallis, Sean McMullen, Greg Egan, James Patrick Kelly, Kate Wilhelm, Larry Niven, and many others.

November/December 2017—
Vol. 41 No. 11&12 (whole #502&503), $7.99, 208pp, cover art by Eldar Zakirov
• This issue has a novella by Connie Willis, novelettes by Greg Egan, Rick Wilber, and Jason Sanford, and short stories by Nick Wolven, Jack McDevitt, James Patrick Kelly, Michael Cassutt, Emily Taylor, Tom Purdom, James Gunn, Joel Richards, and Norman Spinrad.
• Poetry is by Jennifer Crow, Robert Frazier, Ken Poyner, G.O. Clark, Jane Yolen, and H. Mellas.
• Departments include an editorial by Sheila Williams; a “Reflections” column by Robert Silverberg, “Gog and Magog”; an “On the Net” column by James Patrick Kelly, about time travel (he has posted the column on his site, here); and an “On Books” column by Peter Heck, covering titles by Norman Spinrad, Peter S. Beagle, and others.

Nov/Dec 2017—
Vol. 133 No. 5&6 (whole #734), $8.99, 258pp, cover art by Kent Bash
• This issue has a novella by Marc Laidlaw, novelets by Kate Wilhelm, Nick Wolven, R.S. Benedict, Ingrid Garcia, and David Erik Nelson, and short stories by Meg Elison, Larry Niven, and J.R. Dawson, and a poem by John W. Sexton.
• Departments include Charles de Lint’s “Books to Look For”, covering David Wiesner and Donna Jo Napoli and others; Michelle West’s “Musing on Books,” covering Elizabeth Bear and others; a science column about invisibility by Pat Murphy and (the late) Paul Doherty; a “Films” column by David J. Skal; and a “Curiosities” page by David Langford, discussing a 1912 book by Max Beerbohm. 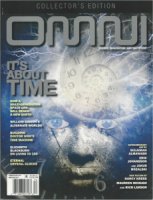 Winter 2017—
$10.99, 120pp
• First issue of a revived print edition of Omni Magazine, now published by PGMI in Los Angeles, with editor-in-chief Pamela Weintraub and fiction editor Ellen Datlow. (Other familiar names on the masthead include executive editor Robert K.J. Killheffer, contributing editors Keith Ferrell, Elizabeth Hand, Simon Ings, and Michael Shermer, and fiction copy editor Paul Witcover.)
• The magazine first ran from October 1978 through the end of 1995, with an Online version running from 1996 to 1998 (SFE) with fiction editors Ben Bova, Robert Sheckley, and Ellen Datlow.
• This issue has three stories, by Nancy Kress, Maureen McHugh, and Rich Larson. There’s also an interview with William Gibson, an essay on time travel by Michael Shermer, and columns by Paul Levinson, David Marlett, and others.
• The magazine’s cover displays URL omnimagazine.com but this site is an archive of past material, with no information about the new magazine. There is a Facebook presence at https://www.facebook.com/realOMNI/. This issue was released on newsstands on October 24th. 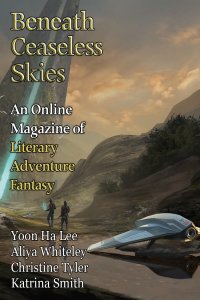 Today we have author and scholar Siobhan Carroll (author of “In the Gardens of Night“) together with steampunk expert Austin Sirkin (Track Director at Anachrocon) via the magic of Skype. They talk about the academic pursuit of science fiction, fantasy, and related fields, as well as why you can’t Just Glue Some Gears On It (And Call it Steampunk), (Justin Bieber notwithstanding). Alternate history, modernism, post-modernism, post-post-modernism, and dystopian YA