Bacigalupi’s first adult novel since his Hugo and Nebula Award-winning debut The Windup Girl combines his signature grim extrapolations about environmental devastation with a compelling and fast-moving thriller, set in a drought-stricken American Southwest where water is worth killing and dying for. ‘‘Baciga­lupi’s most crucial and important novel to date…. The classic thriller elements are in place… but The Water Knife is also a fully realized SF novel, with a disturbingly credible future.’’ [Gary K. Wolfe]

The concluding volume in the YA fantasy Penryn & the End of Days trilogy, following Angelfall and World After, delivers on the apocalyptic premise of a world shattered by angels as human girl Penryn and rogue angel Raffe continue their uneasy partnership and try to end the war and build a life in the ruins.

The reigning master of ‘‘rural fantasy’’ (creator of the Sookie Stackhouse/True Blood series) returns to the tiny village of Midnight, Texas (familiar from Midnight Crossroads) with a new story of magic and mystery, with local psychic Man­fred Bernardo embroiled in a murder case that brings unwelcome publicity to the town. Harris’s customary warmth and humor shines throughout.

This novel, a bestseller published last year in the UK by the acclaimed author of Chocolat, is a witty, lively, and inventive tale featuring gods of the Norse pantheon, told from the breezy point-of-view of the wily trickster Loki, who wants to set the record straight about his sup­posed villainy and betrayal.

In this ambitious YA fantasy, teenager Aza Ray suffers from a mysterious lung disease that threatens her life – until she discovers the magi­cal world of Magonia, hidden above the clouds and populated by strange characters, some of whom have plans for her. ‘‘Headley gives readers a lot to think about, from the hidden agendas of swashbuckling pirates and ghost birds to social unrest and the politics of resource management and environmentalism…. An inventive journey into a different world.’’ [Colleen Mondor]

In this compelling combina­tion of post-apocalyptic SF, fantasy, coming-of-age tale, and classic hero’s journey, an Archivist named Wasp – charged by the goddess Catch­keep to hunt ghosts – wearies of her duties and strikes a bargain with a ghost instead, traveling to the underworld and discovering shocking secrets about the world and her role.

The page-turning conclusion to the hard SF thriller series that began with Prometheus Award-winning Nexus, set in a world in the midst of unprecedented transformation as the first post­humans come of age and a mad scientist plots to seize the world’s technology.

The author famed for her Temeraire series of histori­cal fantasies surprises and delights with this new standalone volume set in a world inspired by the Polish folktales Novik heard as a child, where the malevolent entities of a dark wood menace a peaceful valley. The ‘‘prose is clear and smart without ever calling attention to itself as being both of those things (which is a lot harder than it looks), the plot is propulsive, and it’s hard to stop reading at just one chapter.’’ [Adrienne Martini]

Nnedi Okorafor, The Book of Phoenix
(DAW May 2015)

This prequel to Who Fears Death, set much earlier (but still in our own future), con­cerns the genetically engineered superwoman Phoenix Akore, who escapes the Manhattan tower where she was created and travels to Africa and back, becoming a sort of radical superhero revolutionary in the process. ‘‘For all the anger and passion that continues to fuel Okorafor’s work, there remains a certain joyful lightness of invention… [this is] actually a more playful and experimental novel than Who Fears Death, and in a weird and unsettling way, it’s a lot of fun.’’ [Gary K. Wolfe]

Nova Ren Suma, The Walls Around Us
(Algonquin Mar 2015)

This unsettling YA fantasy alternates between Violet, a ballerina with a troubling secret, and Amber, the inmate of a mysterious ju­venile detention facility called Aurora Hills – and gradually reveals the story of Orianna, the girl who connects them. ‘‘A tour-de-force packing immense emotional power…. Suma takes risks here that few authors are capable of, and most readers do not dare hope for.’’ [Colleen Mondor]

This debut novel by an acclaimed short story writer is a rollicking combination of fantasy, Western, and steampunk elements, with Taoist psychopomp Lou Merriwether leaving China­town to investigate the disappearance of some local boys in the mountains of Colorado, and dealing with sentient bears, undead villains, and weird landscapes on the journey.

The Hugo Award-winning author of the Digger comic series and the text/graphic novel combo Dragonbreath series delivers her first standalone middle-grade fantasy, an inventive twist on hor­ror tropes, with 12-year-old witch Molly taking control of the monster-filled castle of the title – but is she wicked enough to rule?

In a future world of supercharged and sophisticated social media, behavioral and di­agnostic technologies allow people to be sorted into one of 22 ‘‘Affinities’’ – vast organizations of people scientifically optimized to cooperate and support one another, and change the world in the process… but, inevitably, the Affinities come into conflict. ‘‘Wilson has always written strongly humanistic tales of relationships with­in SF frameworks, and sometimes the SF itself is mostly a way of exploring the ways in which we cope, or fail to cope, with change. This may be Wilson’s grand theme, and it’s no less skill­fully handled here than in his more spectacular slingshot novels.’’ [Gary K. Wolfe] 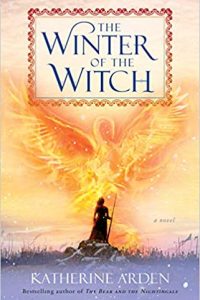