The Ocean at the End of the Lane by Neil Gaiman debuted in first place by a huge margin on the hardcover list, while A Dance With Dragons by George R.R. Martin took second. The new runner-up was Earth Afire by Orson Scott Card & Aaron Johnston (Tor) out of 46 titles nominated, up from the 44 we saw last month.

George R.R. Martin’s A Game of Thrones stayed seated in first place on the paperback list, with his A Clash of Kings moving into second. The runner-up was Home from the Sea by Mercedes Lackey (DAW) with 53 titles nominated, up from last month’s 47.

There was another big margin for a debut book, this time on the trade paperback list, with Abaddon’s Gate by James S.A. Corey firmly in first place this month. There was no runner-up, with 36 titles nominated, down from the 42 we saw last month.

Star Wars: Book of Sith by Daniel Wallace took top honors on the media-related titles this month, and the new runner-up was Star Trek: Into Darkness by Alan Dean Foster (Gallery). There were 22 titles nominated, up from last month’s 16.

Forgotten Realms: The Last Threshold by R.A. Salvatore moved up to number one in the gaming-related titles, with no new runner-up. There were 13 titles nominated, up a tick from the 12 we saw last month. 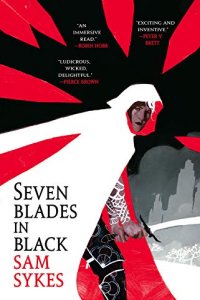 The SFWA Pacific Northwest Reading Series hosted Caroline M. Yoachim and Shanna Germain on November 14, 2019 in Portland OR. Ken Scholes gave a eulogy for John Pitts. The next reading, featuring Daniel H. Wilson, Catherynne M. Valente, and Django Wexler, will be held January 30, 2020. For more, see the SFWA website. This story and more like it in the January 2020 issue of Locus. While you are here,

Marie Brennan and Kari Sperring in Conversation: History Is not a Theme Park