This homage to L. Frank Baum’s The Wonderful Wizard of Oz includes 15 original tales that reinvent the world and characters of the classic novel in radical ways, with stories by Orson Scott Card, Theodora Goss, Ken Liu, Rachel Swirsky, Jane Yolen, and more. Includes an introduction by Gregory Maguire.

One of the founding fathers of steampunk brings back his beloved character Langdon St. Ives and his old nemesis Dr. Ignacio Narbondo, who has a dark plot that involves a stolen skull – and kidnapping someone St. Ives holds dear. ‘‘Blaylock has a keen eye for zaniness… but amid delightful absurdities, The Aylesford Skull won’t neglect keen minds, and equally urgent feelings.’’ [Faren Miller]

The 18 stories of ‘‘gaslamp fantasy’’ are sure to delight aficionados of neo-Victorian fiction, with work from Elizabeth Bear, Jeffrey Ford, Kathe Koja, Tanith Lee, Maureen McHugh, Delia Sherman, Catherynne M. Valente, and others.

This debut collection by the award-winning Australian SF writer gathers four SF and fantasy stories, all original. Includes an introduction by Nancy Kress.

This impressive debut begins a new series that combines elements of detective stories, political thrillers, alternate histories, and fantasies. Vissarion Lom is an investigator for a totalitarian state reminiscent of Stalinist Russia, tasked by the secret police to hunt down a terrorist through a world made strange by the presence of angels, giants, and an endless forest, among other monsters and magic. ‘‘An excellent debut and an excellent opening.’’ [Faren Miller]

When conjoined twins Makeda and Abby are separated, only Abby retains the magic inherited from their family of godlets, and Makeda strikes out on her own. ‘‘The tale really begins and ends with the two sisters, trying to negotiate between love and freedom, and trying to survive one hell of a family.’’ [Gary K. Wolfe]

The acclaimed author presents her YA debut, set in a future Brazil where a talented young artist meets her city’s Summer King, raised from the lowest strata of society but fated to die as a sacrifice after reigning just a year. Together, they work to transform their corrupt city through art – before his time runs out.

This retrospective volume, aptly subtitled ‘‘A Great Big Book of Stories’’, collects 35 of the acclaimed author’s most compelling stories from the past 50 years, ranging from her 1958 genre debut ‘‘The Wait’’ to 2013’s ‘‘The Legend of Troop 13’’, arranged not chronologically but by ‘‘preoccupations… a politer word for what drives me than obsessions.’’ Includes an introduction by Gary K. Wolfe.

One of our most ambitious (and puckish) authors collects 24 stories, two original, many of which take beloved SF tropes in unexpected directions. Roberts reinvigorates subjects ranging from time travel and immortality to robots and genetic engineering – and even a fresh take on the classic Adam and Eve tale.

The author’s debut novel Swamplandia! was a Pulitzer Prize finalist last year, and now she brings us her second story collection (after 2006’s St. Lucy’s Home for Girls Raised By Wolves), this time gathering eight pieces of literary fiction touched with magic and the surreal. Two of these – the title story and ‘‘The Seagull Army Descends on Strong Beach’’ – were previously reprinted in volumes of the Best American Short Stories series.

This debut novel from the short story writer (and editor for Apex Books) is an ambitious post-apocalyptic tale about a woman thrust into an isolated community of genderless people (‘‘neuters’’ or ‘‘neuts’’) who rely on logic and science, and who strive to re-establish ‘‘balance’’ by releasing plagues designed to keep the human population in check.

For the latest volume in the ambitious series collecting the SF Grand Master’s early stories, editors Terry Dowling & Jonathan Strahan have chosen 16 pieces from the ’40s and ’50s, including several about Vance’s series character, Magnus Ridolph. ‘‘They’re all pretty entertaining, straightforward pulp adventure, and here and there is a hint of the ingenuity, imagination, and verbal playfulness that characterized Vance’s later work shines through.’’ [Gardner Dozois]

This collects 11 vintage stories not otherwise currently available in book form, some seeing print for the first time in 25 years, arranged as a ‘‘Grand Tour’’ of the solar system (with a couple of exceptions). Includes classics like ‘‘Blue Champagne’’, ‘‘Retrograde Summer’’, and ‘‘The Manhattan Phone Book (Abridged)’’, plus an introduction by the author and story notes. ‘‘The freshness and vividness of these stories after nearly four decades suggests that Varley’s work belongs in the permanent canon.’’ [Russell Letson] 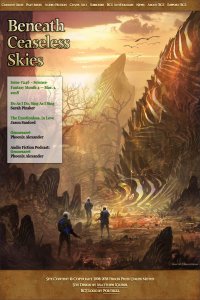 [Editor’s note: part of our 2017 year-in-review essay series from the February 2018 issue of Locus] The best science fiction of 2017 fell into one of two camps: tales of cli­mate change or stories of colonizing our solar system. Kim Stanley Rob­inson’s magisterial New York 2140, a personal pick for best novel of the year, showed everyone a way forward on how to discuss climate change and our collective future