Dream Foundry, a “non-profit dedicated to bolstering the careers of nascent professionals working with the speculative arts,” has announced the winners of its 2021 art contest.

In his introduction to Erica L. Satifka’s debut short-story collection, How to Get to Apocalypse and Other Disasters, Nick Mamatas recalls coming across Satifka’s work as co-editor of Clarkesworld while trawling through the slush pile. Coincidentally, it was while scrolling through the social media slush pile that I came ...Read More

There’s no way to overstate our obsession with immortality. From the Epic of Gilgamesh to Marvel’s Eternals, humans have always dreamt of living forever, and speculated on what it would be like to do so. And with so many examples in existence, it’s difficult to present readers with a fresh take on the sempiternal trope, but Natashia ...Read More

It’s always tricky to review the second volume of a duology without loading it with spoilers for readers who may not have read the first volume, or who might quite reasonably have decided to wait until the complete work was available (authors have been known to leave you hanging, after all, sometimes in ways that make you ...Read More

In what is likely one of the first pandemic-related novels for teens, author Lilliam Rivera’s We Light Up the Sky drops an alien invasion into the lives of three Los Angeles teens who are still reeling from COVID. (It’s important to note that the pandemic is not caused by the aliens; they just happen to ...Read More

Caitlin Starling’s The Death of Jane Lawrence is a horror Gothic with romance elements that relies on much more than atmosphere and a crumbling manor to hook readers and keep them glued to the pages. Between dark magic and gore, this is a novel with a historical angle that ...Read More

Sacha Wunsch’s just slightly futuristic debut Lies My Memory Told Me offers up an excellent technological twist with the invention of “Enhanced Memory.” People no longer have to spend the money to travel, take the time to learn a new skill, or risk their lives on activities like racing cars. They can ...Read More

Author Alice Sebold, who wrote fantasy The Lovely Bones (2002), has been in the news recently because a man who went to prison based on her testimony was released and had his conviction overturned. In Sebold’s 1999 memoir Lucky, she described her sexual assault and the trial of alleged perpetrator Anthony J. Broadwater. Broadwater, 61, spent 16 years in prison and was a registered sex offender after his release, ...Read More

Public voting is open for the Analog Science Fiction and Fact Analytical Laboratory (AnLab) and Asimov’s Science Fiction Readers’ Awards, covering works published in their 2021 issues. Readers can select three favorite choices from each magazine in novella, novelette, short story, poem, and cover categories, as well as a “Best Science Fact” article from Analog. The deadline to vote is February 1, 2022.

For more information, see the Analog and ...Read More

The Horror Writers Association (HWA) is partnering with United for Libraries, Book Riot, and Booklist for the fourth annual Summer Scares Reading Program. The program “introduces readers and librarians to new authors and helps start conversations extending beyond the books from each list and promote reading for years to come.”

As part of its attempts to improve diversity, Penguin Random House has published its “phase one” study on the demographics of authors, illustrators, and translators of works published from the start of 2019 to the end of 2021. They received 3,415 responses, and concluded that the company’s ‘‘contributor demographics do not reflect U.S. reader demographics when it comes to race and ethnicity. Black, Hispanic, and Indigenous representation is low, while ...Read More

The 36th Annual Asimov‘s Readers’ Awards ballots are now open for voting. The winners “join the pantheon of Asimov authors who represent the Who’s Who of science fiction writers over the past thirty years.”

The voting is open from now until February 1, 2022. For more information about the awards and how to vote, see the announcement here.

While you are here, please take a moment to support Locus with ...Read More

The 2022 Hugo Awards will be presented at the 80th World Science Fiction Convention, Chicon 8, to be held September 1-5, 2022 at the Hyatt Regency hotel in Chicago Illinois. Members with an attending or supporting membership for Chicon 8 or DisCon III are eligible ...Read More

The National Book Critics Circle (NBCC) has announced the finalists for the 2021 NBCC awards. Authors and titles of genre interest are below:

We Need Diverse Books (WNDB) has announced the winners of the 2022 Walter Dean Myers Awards, to “recognize diverse authors whose works feature diverse main characters and address diversity in a meaningful way.” in the Teen and Young Readers categories. They have announced one winner in each category, and two honorees. Titles and authors of genre interest include:

Author Colm Tóibín has been named the new Laureate for Irish Fiction by the Arts Council of Ireland. He takes over from Sebastian Barry, and his three-year term begins this month. The Laureate position “seeks to acknowledge the contribution of fiction writers to Irish artistic and cultural life by honouring an established Irish writer of fiction, encouraging a new generation of writers, promoting Irish literature nationally and internationally and encouraging ...Read More

The Mystery Writers of America (MWA) announced the 2022 Edgar Allan Poe Awards, “honoring the best in mystery fiction, non-fiction and television,” with numerous authors and works of genre interest.

The publication of The Cabinet is a second (not a first) for both the author, Un-Su Kim, and publisher Angry Robot. While The Cabinet is Kim’s debut novel (winning South Korea’s Munhakdongne Novel Award back in 2006), it’s his second book to be translated into English. Somewhat confusingly, but typical for works in translation, English audiences were ...Read More

Paladin’s Hope is the third book in T. Kingfisher’s (AKA Ursula Vernon’s) Saint of Steel series. Like Paladin’s Grace and Paladin’s Strength before it, Paladin’s Hope is a fantasy romance at its core. There are gods and clerics and gnoles set against a medieval-esque city and countryside. The two main characters are destined for each other but ...Read More

Speaking of skies – when Greg Egan leaves our familiar cosmological or geometrical framework, he really leaves it, as he does in The Book of All Skies, which is set on a planet that has been sliced up like a spiral-carved ham by structures called Hoops. (At least that’s what I get ...Read More

Ronald Joseph Goulart was born January 13, 1933 in Berkeley CA, and worked in advertising after college. His first SF story, “Letters to the Editor”, appeared in 1952, and he published a number of stories before debut novel The Sword Swallower (1968), first of his ...Read More

James Brian Clarke was born May 23, 1928 in Birmingham, England, but spent most of his life in Canada. He began publishing genre work with “Artifact” in Analog in June 1969, where he continued to publish stories for the rest of his career. Debut novel Expediter (1990) includes material first published there, as does second book Alphanauts (2006), winner of ...Read More

The Speculative Literature Foundation (SLF) has announced that artist Michelle Feng is the winner of their 2022 Illustration of the Year.

“Feng’s winning piece will be featured throughout 2022 on the Speculative Literature Foundation’s website and on social media. In addition, it may be featured in limited edition SLF-related marketing materials, such as bookmarks and pins.”

Fan and convention organizer Bill Wright, 84, died January 17, 2022 in the Alfred Hospital in Melbourne, Australia, the day before his 85th birthday.

Wright, born 1937, was a stalwart of Australian fandom since the late 1950s. He was a founding member of both ANZAPA and the Nova Mob; HonSec of the Eighth Australian Science Fiction Convention (the eighth Australian Natcon) in 1969; secretary of Aussiecon in 1975; awards administrator ...Read More

Flash Fiction Online’s October 2021 issue seeks to “explore that darkness that lurks inside things that initially seem harmless….” Sarah Pauling’s “Litany in the Heart of Exorcism” considers the casting out of a demon – but is something that has kept a young woman from a marriage she does not want demonic? “Better devil-deals than marriage contracts.” ...Read More

After a stint plying piano for a radio show in Porto Alegre when he was only 15, Benício initially dedicated ...Read More 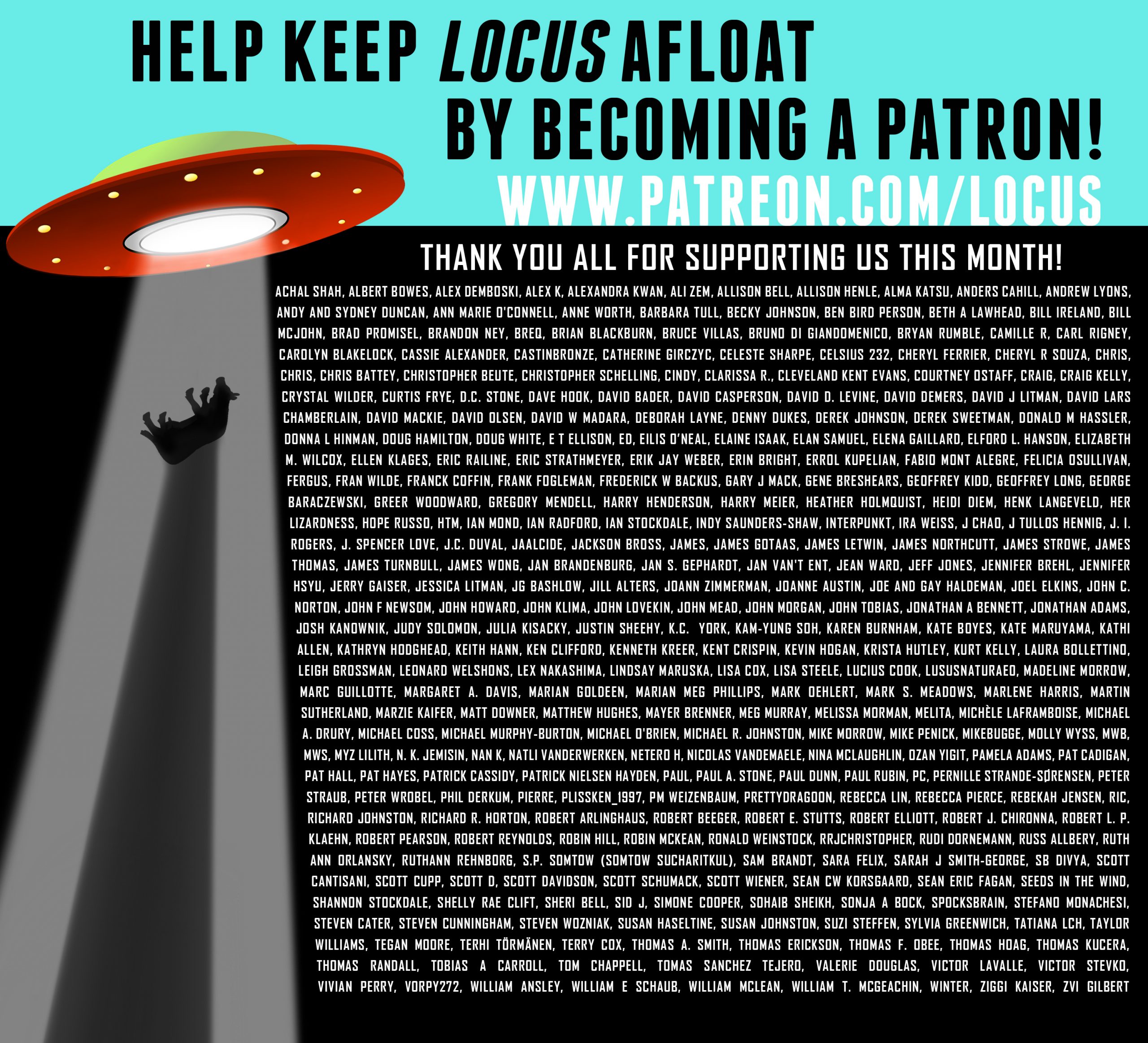 And… we’re back! Neo (Keanu Reeves) and Trinity (Carrie-Anne Moss) are still stuck in the Matrix. Versions of Morpheus and Agent Smith return, played by new actors (Yahya Abdul-Mateen II and Jonathan Groff, respectively). There are new characters, such as Bugs (Jessica Henwick) and the Analyst (Neil Patrick Harris). Niobe (Jada Pinkett Smith) and the Merovingian (Lambert Wilson) reappear, though their characters are essentially unrecognizable.

This was my first full year reviewing books for Locus. I’ve enjoyed every minute of it, even the yawning, anxiety-inducing depth of the white screen as I des­perately cobbled together something coherent to say about the books I was discussing. On that note (not the yawning depth of the white screen, but the books), I’ve read some terrific genre fiction this year. As has been the case for a decade ...Read More